With record tourist numbers in July and rave reviews on Trip Advisor for Estepona’s historic centre, it certainly looks like the Town Hall’s campaign to remodel and revive the old town’s streets is paying off.

According to Estepona councillor, Marina Segovia, the Costa del Sol town welcomed over 27,000 tourists this July, 24% more than it did during the same month in 2013.

At the same time, overnight tourism was up by 15%, with a total of more than 131,300 hotel nights sold in the town’s establishments, compared to the same period the previous year.

For Segovia, the data was proof that “the renovation of the historic centre and new projects attracting an ever increasing number of visitors.”

But, rather than just take the councillor’s word for it, we took a look at Trip Advisor to see what visitors and locals themselves had to say:

Andy, Estepona
: “The Old Town is really coming in to its own. Gorgeous floral displays colour-coordinated by each street is a superb idea.. When you add in the lovely mosaics dotted around the town, the cool plazas, fountains and artwork, a day (or at least a few hours) walking around and taking in the sights is well rewarded.”

MerlinIt, Singapore: “Estepona old town has been beautified [and] is now, in my opinion, much prettier than Marbella’s old town. Almost all the streets are car free. Tapas bars abound and it has a nice paseo, where you can walk and feel the breeze.”

Kellogg84, Canada: “All the streets have a colour theme and the flowers are beautiful. Can easily get lost wandering around them all, and even the paving is very well done. Lots of little bars and cafes around too.”

Estepona beautification drive began back in 2012 and dozens of streets have not only been given a facelift, thanks to pedestrianised roads and squares, new pavements, and the now-famous plants pots chosen by local residents, but have also had an overhaul behind the scenes, with new power and drainage networks. 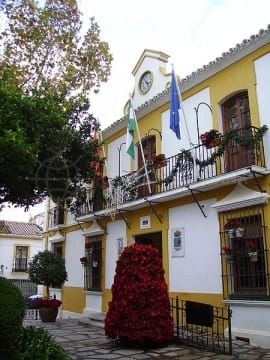