Phoenicians, Romans, Visigoths, Moors, and Christians took turns as settlers and developers of what is today the area known as Marbella. The city alternately rose and waned in importance with the passage of time and by the 1940s was a sleepy fishing village with a population of 900 inhabitants. One day, as Alonso de Hohenlohe and his father Prince Max Egon zu Hohenlohe-Langenburg were driving through the area, their Rolls Royce broke down. Alonso was so impressed by the site that he decided to turn it into a tourist resort. He opened the American-style Marbella Club Hotel in a lush area by the sea in 1954 and the rest is history. The hotel became a meeting point for Europe’s nobility, and numerous gatherings, including charity fundraising galas, are held here to this days.

Marbella attracted the Arabic nobility as well. Prince Fahd of Saudi Arabia, arrived in 1974 with a wealthy entourage of Saudi nobles, including none other than a youthful Osama bin Laden. Fahd continued to frequent Marbella’s casinos after he was crowned king of Saudi Arabia in 1982. The city had by then acquired its cachet as the exclusive retreat of cosmopolitan personalities, including Gunilla von Bismarck, Antonio Banderas and his wife Melanie Griffith, Joan Collins, Sean Connery, and many more. In time, it became the internationally famous seaside resort that it is today, associated with luxury, golf, and foreign tourism.

Still, Marbella’s historic and typically Andalusian centre, as well as the town’s proximity to some of the region’s natural and historical landmarks also provide a good deal of local colour to those who come here to visit or live. Day trips or longer jaunts can be made on and beyond the Sierra Blanca mountain range that is seen from the town, for instance to the Serranía de Ronda, home of yesteryear’s bandolero bandits, where a host of white villages–some humble and silent while others offer particular attractions–dot a lush landscape of alternating pine, cork oak, citrus, and almond groves in a network of deep valleys and cascading rivers. Also within reach in half a day’s drive or less are the important cities of the region: Malaga, Cordoba, Seville, Granada, and Cádiz.

The concept of the “Golden Mile” arose to designate the area more or less from Cabopino to the west of Marbella to Guadalmina, and its key feature is the N340 coastal road, on both sides of which shopping centres, golf courses, and front-line beach, front-line golf, and other residences fight for space. Among the golf clubs found a moment’s drive from town are (to the east) Rio Real Golf, Marbella Golf Club, and Cabopino Golf and (to the west) Aloha Golf, La Dama de Noche, Las Brisas, La Quinta, and Los Naranjos. The “Costa del Golf” continues west past San Pedro and toward Estepona and Sotogrande offering a total of over 50 courses, including world championship venues such as Valderrama at Sotogrande.

For its part, Marbella’s Port features both an older fishing port and a pleasure harbour, and there is Cabopino Port also a few kilometres east. The most glamorous place to moor a boat, however, is to the west in Puerto Banús, which looks and feels like a town in its own right. It boasts a multi-cinema complex, a bullring, a maritime museum, a casino and some of the best luxury shops on the Costa del Sol, including the department store El Corte Inglés. Although it began to be constructed in the seventies, Puerto Banús seems like it’s always been there.

Outside of Puerto Banús, other important shopping areas are the Marbella town centre itself, the mall La Cañada on the other side of the N340, with a variety of clothing outlets and the Fnac book, music, and home entertainment megastore–which organises cultural events–and the Centro Plaza Commercial Centre in Nueva Andalusia. Beaches, dining, and nightlife are obviously well-catered to, with some of the names to remember being Nikki Beach for soaking the rays, while two of the best-known night fun venues would be The Suite, part of the Puente Romano Hotel, and the Moorish-style Olivia Valere. As for restaurants, one of the best ways to find a good place is probably just by walking around, for instance in the downtown area near the beautiful historic square Plaza de Los Naranjos.

Marbella has grown at breathtaking speed, with at least one clear disadvantage: political scandal. The arrival on the scene of mayor Jesús Gil y Gil in 1991 was a turning point for the town. A political maverick and football team owner from Madrid of dubious reputation yet tremendous popular appeal, he founded the Independent Liberal Group, which he spearheaded to power on a populist platform that included the promise of ridding the city of beggars and petty crime. The pledge was kept, although at the expense of the civil liberties of those summarily arrested, jailed, and forced to leave. This single achievement won him re-election on numerous occasions in campaigns publicly supported by Sean Connery.Gil began a long tradition in the Marbella town hall of enriching himself and councillors by turning over protected land to luxury housing developers. Not only did the latter pay kickbacks to the politicians in return for licenses, but the shenanigans took place with tacit approval from civil servants in Madrid who were keen on collecting fines for violating nationally protected land. Developers came to consider the kickbacks and fines a mere part of their overall investments.

Gil was forced to resign in 2002 and replaced by Julian Muñoz, who was promptly dismissed by his own party. The next mayor, Marisol Yagüe, was then shown to also be involved in the scams. She went to jail before the end of her term among scores of other shady characters as part of a massive crackdown by the national government in which Muñoz was also locked up. Eventually Yagüe’s own successor was sent to prison too and the Junta de Andalucía took the unprecedented step of shutting down the Marbella town hall altogether.

The emphasis is now on regularising the situation of –or demolishing– the countless homes involved, many of whose owners had no idea they were buying an illegal construction. On the positive side, developers are now more legit and buyers more careful, while plenty is on offer. Whether one is after an apartment, townhouse, penthouse, or even a villa, falling market prices and the current general economic downturn may well translate into an opportunity to find bargains on property for rent or for sale. Last summer’s hotel traffic on the Costa del Sol resisted the foreseen downturn in bookings, so it remains to be seen if newcomers to Marbella, Puerto Banús, or the rest of the Costa del Sol will also have the pleasure of finding the area a bit less crowded than it has traditionally been. Whatever the economic fallout, Marbella, the heart of the Golden Mile, is poised to remain a unique, exclusive, and exciting luxury resort to move to or spend a holiday. 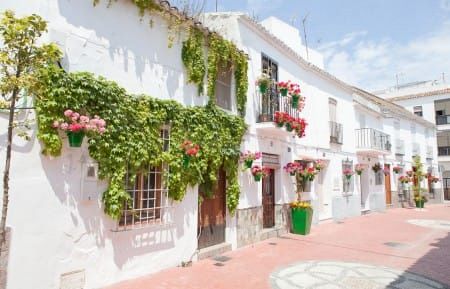