Life on the Golden Mile

This palm-lined avenue runs parallel to the sea connecting Marbella town and Puerto Banús, with its glamorous marina. The sea-facing side of the Golden Mile contains a narrow beachside stretch with many of the most prestigious villas, apartments and resort hotels in the region, including the iconic Marbella Club Hotel and Puente Romano Resort Hotel, both of which are intimately connected with the rise of Marbella as an international elite destination. 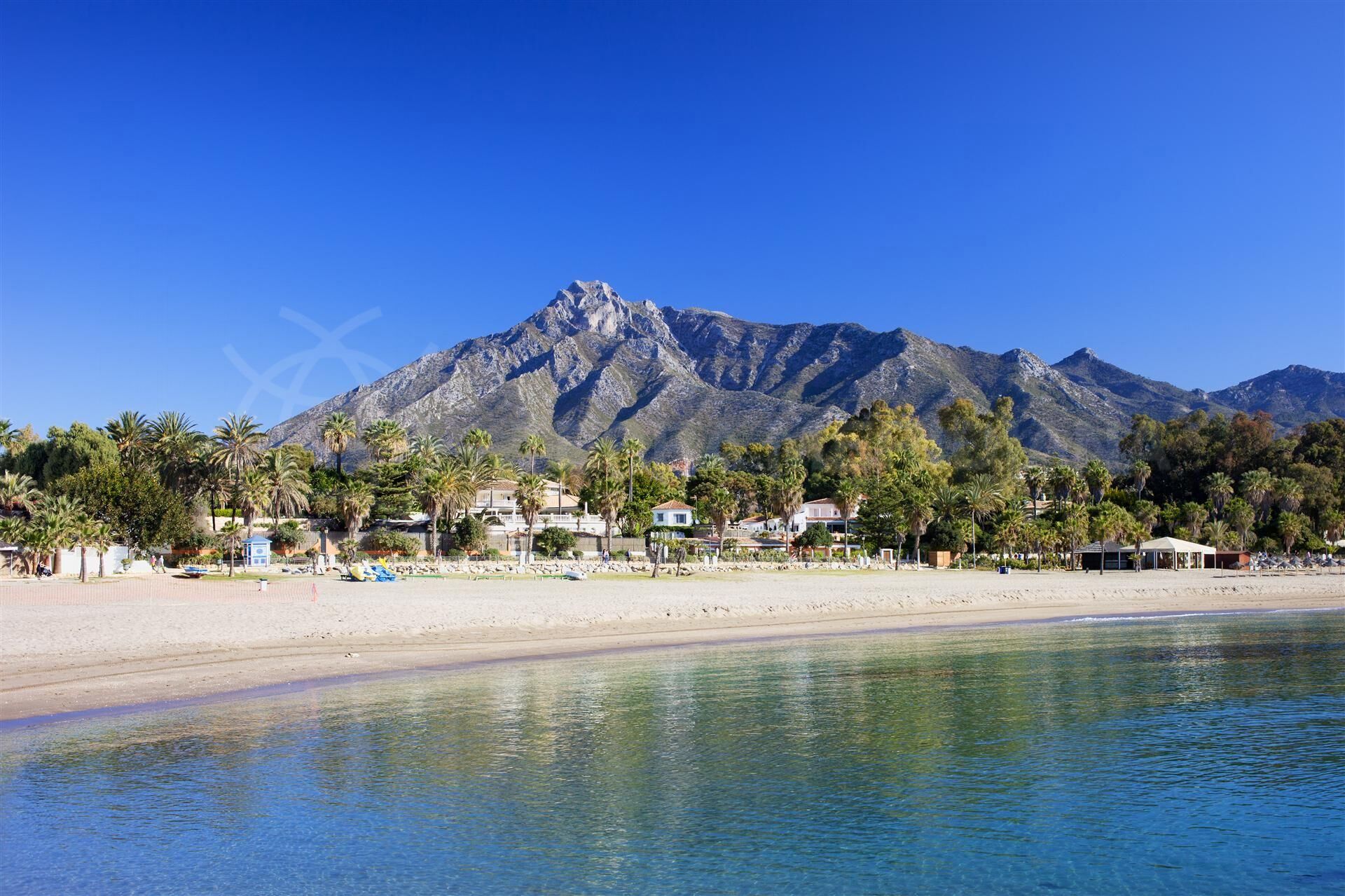 On the mountain side of the road are located exclusive leafy residential areas including apartments and townhouses but above all villas. It is also home to a series of small commercial centres with interior design studios, luxury furniture outlets, elegant cafes, restaurants and some offices. A prominent feature on the mountain side is the Marbella mosque, known officially as the King Abdul Aziz Mosque and designed by Spanish architect Juan Mora in 1981.

Situated close to it is the immense palace complex that is the Saudi royal summer residence. Remarkably well hidden from view in spite of its size, it is the largest private home in Marbella and one of the largest in Spain. Another venue of note right at the Puerto Banús entrance to the Golden Mile is the Ralli Museum, an art gallery that forms part of a series of museums in Santiago de Chile, Punta del Este in Uruguay and Caesarea in Israel. The museum specialises in Latin American and Spanish art, with important collections also by internationally renowned artists such as Salvador Dali, Joan Miró and Marc Chagall. In addition, the museum, which is free of charge and open daily from 10am to 3pm, also features regular exhibitions from leading European and American painters, sculptors and graphic artists. 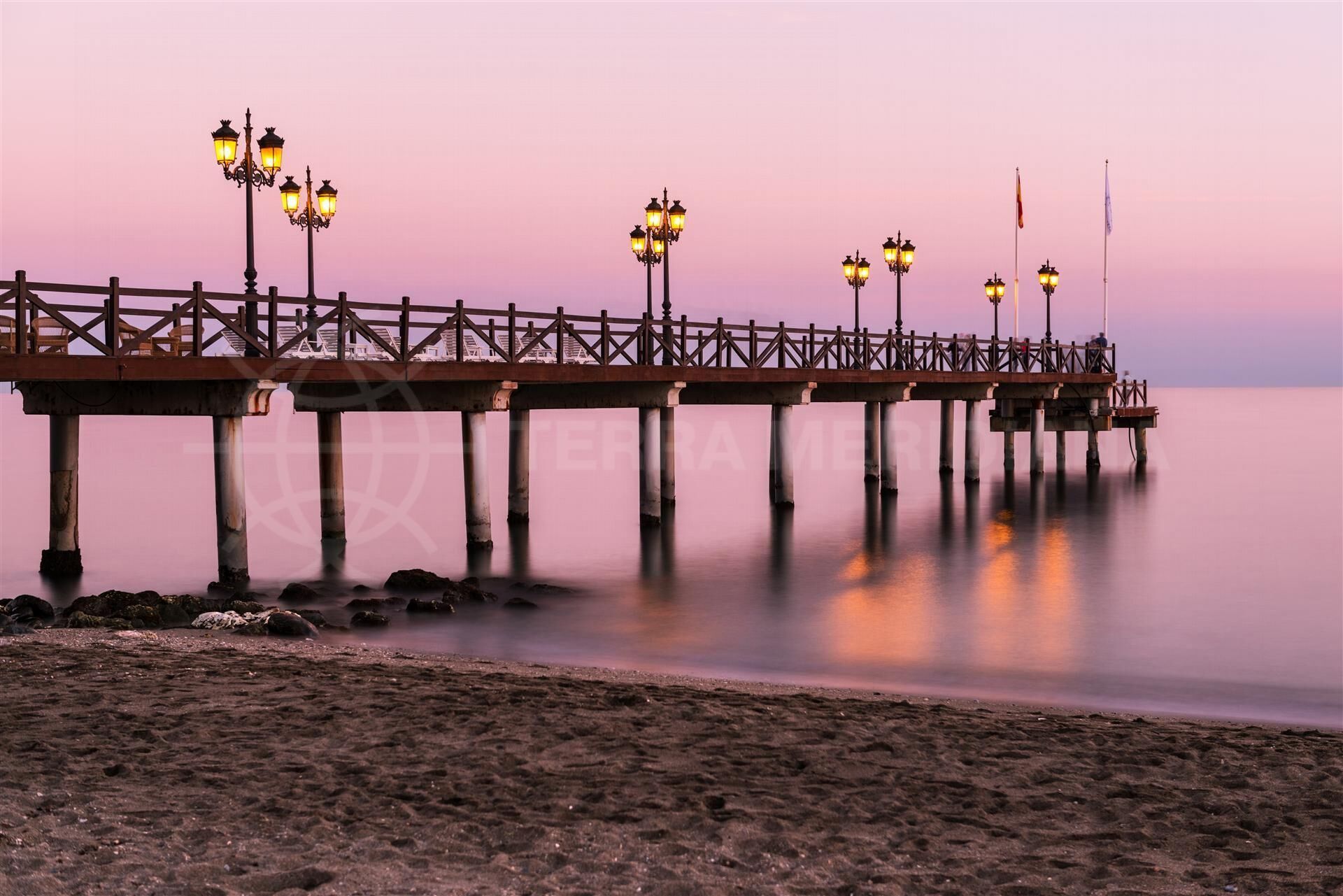 We may think of the Golden Mile as an expression of modern prestige and privilege, but those who enjoys its pleasures today are certainly not the first to do so. The oldest archaeological evidence comes in the form of the remains of a Roman villa found near the mouth of the Río Verde, the point which separates the Golden Mile and Puerto Banús. Built almost 2000 years ago and part of the then Roman fishing town of Silniana (or Cilniana), all that is left of the villa are its floors and some walls, but from the beautifully preserved hand-inland mosaic tiles it is possible to see that the wealthy Romans enjoyed a level of luxury and comfort not only the classic villas built here up to recent times.

Another Roman remnant of great importance is the charming little Roman Bridge around which the Puente Romano Resort Hotel was built in 1979. It continues to form the focal point of a beautiful subtropical garden complex that begins at the hotel’s atmospheric Plaza Village and continues on to its Sea Grill and Del Mar beachside venues. It was on the Golden Mile that Marbella’s destiny as an international luxury resort destination was shaped, for it was near the El Rodeo estate that Ricardo Soriano, Marquis of Ivanrey, acquired that the Marbella Club Hotel would be built by Prince Alfonso von Hohenlohe in 1954. Soon it became a playground for the world’s rich and famous, and by the 1970s Marbella’s reputation also drew in large numbers of permanent and seasonal foreign residents.

In addition to its two famous hotels there is also the iconic Gran Meliá Hotel Don Pepe, designed by Eleuterio Población in 1963, and the less famous but pleasant Alanda Hotel Marbella and Hotel Iberostar Marbella Coral Beach. The Golden Mile is synonymous with exclusivity and privilege, so as you would expect, you will find elegant art galleries, top furniture and fashion brands (including an El Corte Inglés décor outlet), interior design and architecture studios, and many of the top restaurants, cafes and beach clubs in Marbella.

Villa Tiberio, Les Cubes, El Carnicero,  Tai Pan and the Marbella Club Grill are top restaurants offering a variety of international cuisines, but the fine dining epicentre of Marbella is fast becoming the Puente Romano’s Plaza Village – home to such eateries as the Michelin-starred Dani García and Bibo restaurants, Serafina, and Thai Gallery, while famous chefs Dani García and Nobu Matsuhisa are opening new establishments on the Golden Mile. The new Nobu restaurant at the Plaza Village will also be accompanied by a Nobu suites hotel within the Puente Romano.

Organic and Cappuccino Marbella offer the exclusive café experience – the latter right on the beach – while Trocadero Playa, Del Mar, the Sea Grill and Besaya Beach are among the most exclusive beach club venues in the region. Far more humble and traditional but every bit as popular in its prime beachside location is the evergreen Victors Beach chiringuito beach bar. Nightlife in the area is focused on glamorous venues such as Suite at the Puente Romano, Buddha Bar and the iconic Olivia Valere. 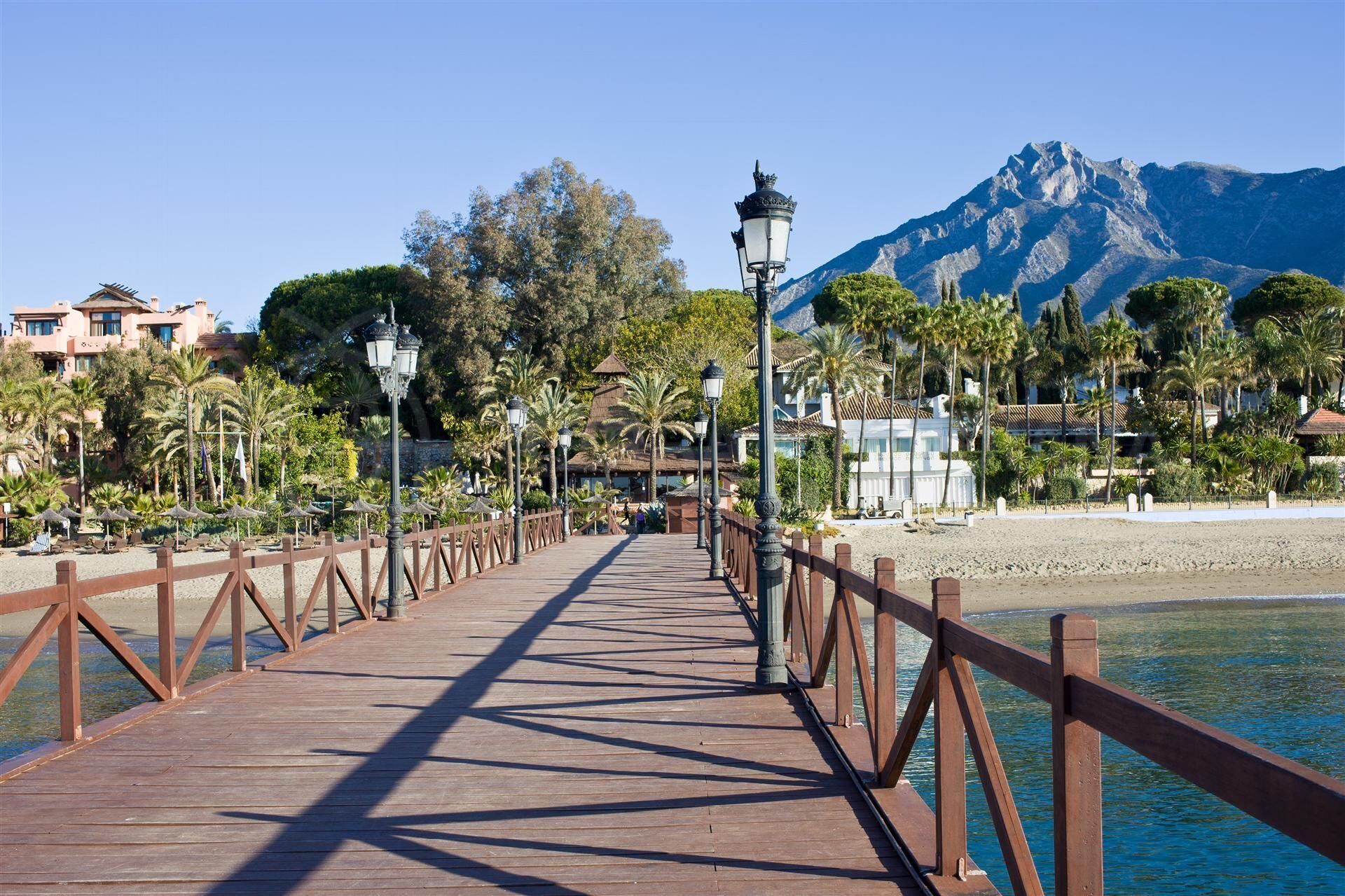 In addition to the nearby golf courses of Nueva Andalucía and the marinas of Puerto Banús and Marbella, the Puente Romano complex offers a prestigious tennis club and Six Senses Spa in which to enjoy either relaxing or active physical exercise. Beach exercise and yoga are also available, while the coastal Paseo Marítimo that connects the shoreline of Marbella and Puerto Banús by means of the Golden Mile is popular with people who jog, walk, cycle and even roller-skate. With all the shopping and nightlife of Puerto Banús, and the bustle and café society of Marbella, just a few minutes away, the Golden Mile is nonetheless a very private haven of exclusivity where you will find a millionaire’s row of front line beach villas and apartments, and on the mountainside residential urbanisations such as La Virginia and Las Lomas de Marbella Club. 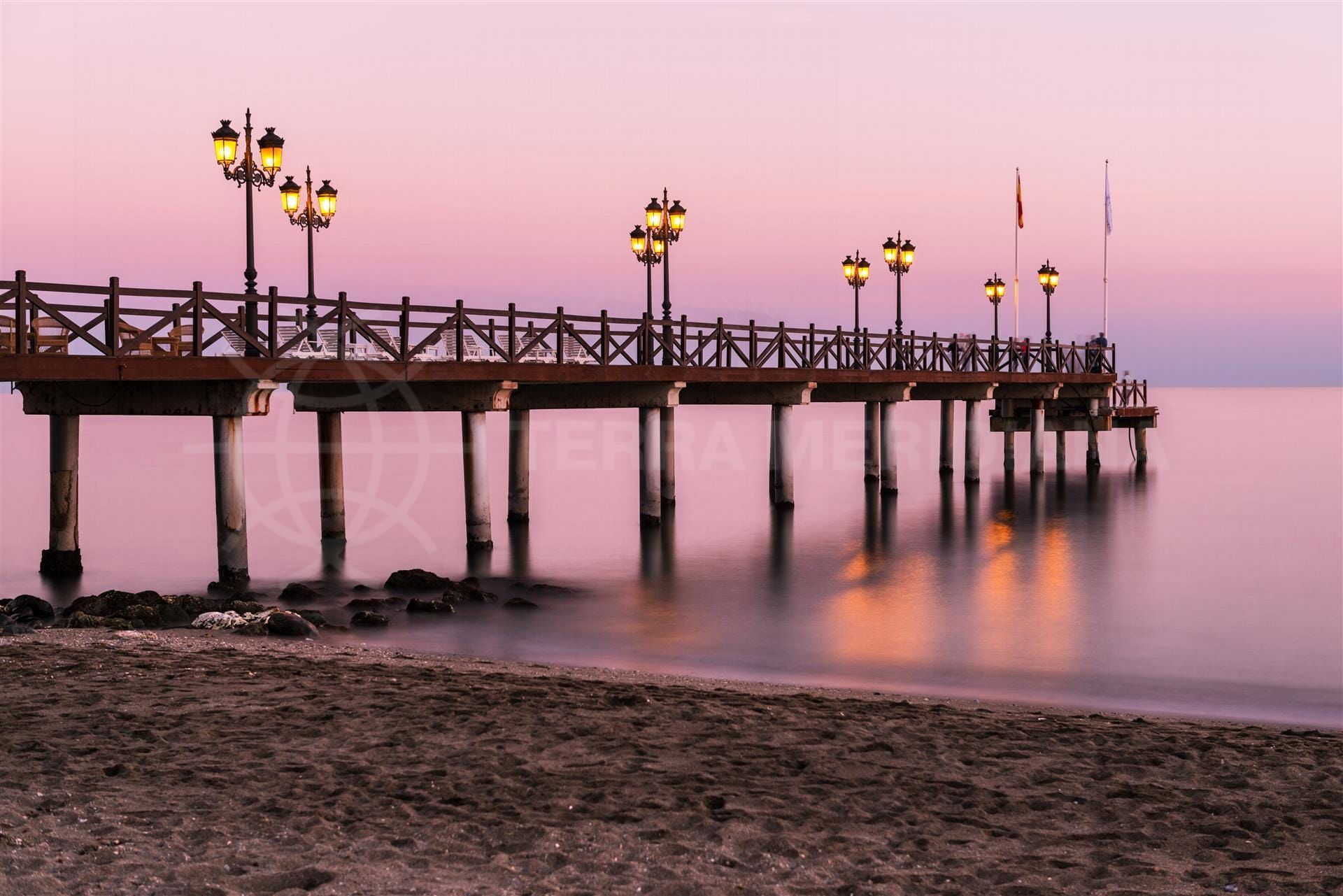